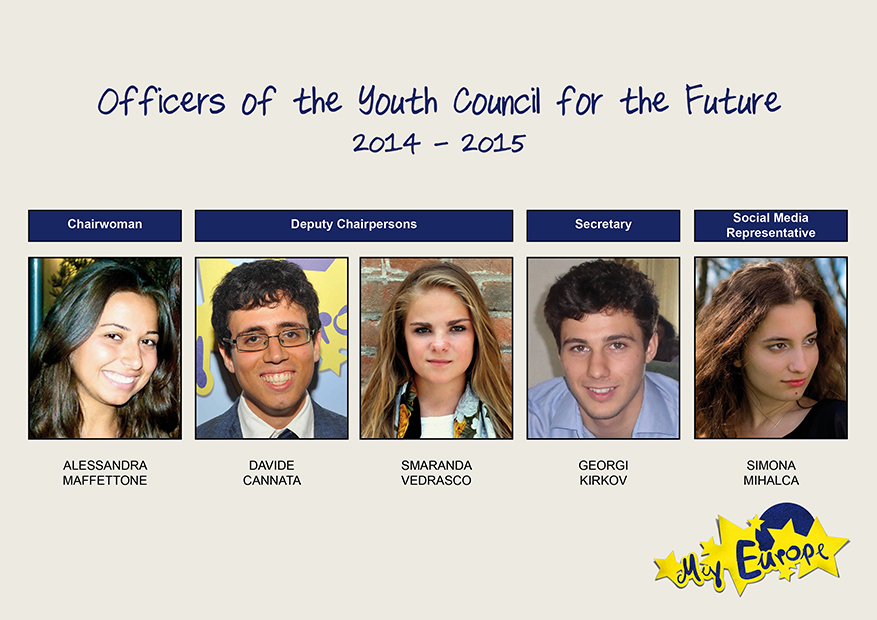 Nearly one month prior to the European parliamentary elections the Youth Council for the Future (YCF) has held its first democratic elections. The council’s 45 members from 10 different countries, brought together through the youth Initiative “My Europe”, were called upon to choose four representatives from their own ranks.

22 year-old Alessandra Maffettone from Naples was elected as the council’s chairwoman. The enthusiastic 16 year-old Austrian Smaranda Vedrasco was voted to serve as deputy chair, as well as, Davide Cannata(23, Italy). Georgi Kirkov from Bulgaria was chosen to handle all organizational matters as  council secretary and Simona Mihalca from Romania  will represent the YCF as Social Media Representative.

“I am really honoured to represent the Youth Council for the Future and hope this is just the beginning of a productive collaboration with all the members of the YCF. We now have the chance to change the future of European youth”, an upbeat and very hopeful newly elected chairwoman Maffettone said after the results were announced.

The Youth Council advocates an active political debate on a local, national and international level, which promotes policy that supports the interests of European youths. The members have jointly adopted a Charter, which states the council’s principles and goals. The idea is to spread the demands and to highten awareness for the concerns of Europe’s young people. The council members, aged between 15 and 25 want to play an active part in the shaping of their future and help to find solutions to Europe’s most pressing problems. To this end, they will be drafting resolutions and passing them on to their political representatives but business leaders and the media will also be called upon to work together with the YCF.